If you ask someone to describe what an emotion is, they might say it is a feeling, sentiment, reaction, passion, excitement, or sensation. Another definition of emotion is it is a spontaneous feeling arising from a person, thing, or experience. Emotions are unique to each individual, are perception based, and subjective experiences. It could be argued that emotions are the sole reason for therapeutic interventions.

People go to counselors because they do not like how they feel. In other words, their emotions are too strong and upsetting or the individual does not appear to have emotions at all. Some people have too much of one emotion versus how they want to feel, e.g. depressed individuals are mostly sad and desire to feel happy again. Therefore, every psychological theory, even cognitive behaviorism, has a goal to ultimately alter the person's emotional state in a positive way.

There is an infinite number or ways to describe emotion. Here are a few of the more common ones:

Here is a table of emotions as devised by Plutchik:

Antonio Damasio: This Time With Feeling from The Aspen Institute on FORA.tv

Most theories of emotion are based on physiology, thought, and the actual emotion. The basic questions are:

Each of the following psychological theorists has their own answers to these questions.

Walter Cannon and Philip Bard worked together to develop the Cannon-Bard theory of emotion. They believed emotions come first and physical reactions come second. For example, a person sees a bear and is afraid. Then the person has the physiological changes of rapid heartbeat and breathing, sweating, and adrenaline that prepares a person for "fight or flight."

James-Lange theory
The James-Lange theory of emotion, proposed by William James and Carl Lange, is the opposite of the Cannon-Bard theory. This theory states that an individual has a physiological response to a stimulus first, and then experiences an emotion based on his or her perception of the physiological response. Therefore, using the same example as the above paragraph, a person sees a bear and starts trembling, breathing faster, and sweating.

The person interprets these physical symptoms as resulting from the emotion "fear," so he or she consequently feels afraid. James and Lange stated that the perception was an important piece of this puzzle. Not everyone has the same emotions for a given stimulus even if they experience the same physical responses, e.g. sweating could mean nervousness, anxiety, fear, or even passion depending on the perception of the individual.

Ronald de Sousa
Ronald de Sousa is a philosopher who believes emotions are subject to the norms and perceptions of society and the individual. They are neither true nor false. Emotions define experiences and experiences define emotions. (Philosophy always gives me a headache). So in respect to the bear scenario, Sousa would say "I am scared of the bear so it must be dangerous," or "The bear is dangerous so I must be scared."

Jesse Prinz Jesse Prinz is another philosopher who proposed an amendment to the James-Lange theory called the "embodied appraisal theory." Recall that the James-Lange theory stated that a person has a physiological response to an event or thing and then the emotion. This is based on the interpretation the person has to their physiology. I'm sweating- therefore I am scared. Prinz, however, proposed that it is not just a simple equation of physiology and perception, but the appraisal the individual has based on the context of the event. Prinz used the following example: a man asks a woman on a date.

Joseph E. LeDoux
Joseph LeDoux is a neuroscientist who believes there is an emotional brain that is separate from the conscious feeling of emotions. For example, he states the automatic physiological responses to danger are hard-wired in the brain and conscious feelings are irrelevant to these physical responses to threats. Conscious emotions, however, are learned through experience and are not innate or hard-wired. LeDoux explains that his model accounts for the emotional malfunctions involved in phobias and posttraumatic stress.

People are not born having irrational symptoms of fear. These emotional problems are learned through experience.

Richard Lazarus (lazarus theory)
Richard Lazarus developed the Lazarus theory of emotion. His model basically states that a thought must occur before an emotion or physiological response can take place. Therefore, a person sees a bear (event), the person thinks "I am going to be shredded into tiny little pieces" (thought), and the person simultaneously feels fear and prepares for "fight or flight."

Singer-Schachter theory
The Singer-Schachter theory was developed by Stanley Schachter and Jerome Singer. Their theory is also referred to as the "Two-Factor Theory." Their theory states that a person has a physiological response, thinks or reasons about it, and then has the emotion. I see a bear (event), my heart starts racing and I breath faster (physical response), I think "hmmm... that bear looks upset that I pushed its bear cub around. I probably should have not done that. I might want to consider retreating before I'm fed to the cub for dinner" (thought), and I feel terrified.

Sigmund Freud
Sigmund Freud believed that mental illness came from repressed emotions in the unconscious mind. Freud believed that release and acceptance of these denied or repressed emotions and memories were vital for mental health. If this emotional energy was not released, Freud noted that it led to physiological symptoms and illnesses. He termed these physiological manifestations of emotions "psychosomatic." Severe psychosomatic cases of repressed memories of trauma led to a diagnosis of "hysteria."

Melanie Klein
Melanie Klein was a British psychoanalyst who worked with children. She believed that children and infants had the emotions of love and hate which further developed into other emotions based on attachments to care givers. Once an infant could distinguish love and hate towards a caregiver, then fear of losing the caregiver arose. Thus an infant's spectrum of emotions develops through attachment.

Robert Plutchik
Robert Plutchik was a psychologist who studied emotions, suicide and aggression. He believed that there were 8 basic categories of emotions- anger, fear, sadness, disgust, surprise, anticipation, acceptance, and joy. Plutchik stated that all other emotions evolved from these 8 basic emotions and he illustrated the relationships of one emotion to another in a wheel diagram. From this diagram, you can see the shades of colors change with respect to the various emotions felt.

Plutchik included this in his wheel because he stated emotions are felt in different intensities, the most intense being rage, ecstasy, vigilance, admiration, terror, amazement, grief, and loathing. Plutchik also stated that "fight or flight" plays an important role in feeling emotions. Both animals and people experience emotions due to survival needs. Some examples of this are threats to safety, attacks, or even seeing a mate.

Plutchik believed that the purpose of emotions was to create an interaction between the individual and the stimulus (an event or person) in such a way that the emotion could be resolved to bring the person back to equilibrium. Therefore, a person sees a bear. They are afraid. The fear serves to protect the individual and prompt action such as running from the bear. The purpose of the fear is to get the person to act so he or she can reach safety and thus return to a calm state. 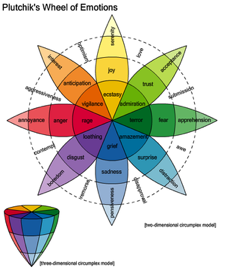 Paul Ekman
Paul Ekman is a psychologist who has studied the relationship between emotions, facial expressions and overall body language. Ekman stated that emotions were universal and felt by people of all different cultures. Although there are some difference in expression of emotions across cultures, Ekman believed that there were basic similarities that could be classified. Ekman devised the Facial Action Coding System (FACS) to categorize every type of facial expression. His research has been vital to lie detection.

Klaus Scherer Klaus Scherer is also a physiologist who specializes in the study of emotion. His theory, The Component Process Model (CPM), consists of 5 sub-systems of an emotion. These subsystems are cognitive appraisal, physiological arousal, motoric system (including facial expression), subjective feeling, and motivational system. The functions of these systems according to Scherer are outlined as follows:


Scherer stated that these subsystems did not work independently of each other but were part of a collective-collaborative process. Subjective feelings influenced and were influenced by other subsystems such as physiological arousal and so forth. Scherer did not believe the process of feeling an emotion was a straight-forward as other theorists stated but believed it was a complex process unique to experiences, subjective feelings, expressions, etc.

Paul Broca
Paul Broca was a French physiologist who is best known for his work on aphasia, i.e. the inability to produce or understand speech from a brain injury. Broca discovered this by examining skulls and brains of people that had mental disabilities. Broca found that the brains of people, who had aphasia, all had brain damage in a specific location in the frontal lobe. This area was also referred to a Broca's area.

Richard Davidson
Richard Davidson is a psychologist at the University of Wisconsin-Madison. Davidson believes that emotions are like learned skills. A person can learn to be anxious just as that person can learn to be happy. Like other skills, Davidson states that it takes patience and practice. Since the brain learns from experience and can adapt and change from experience, the brain can be trained to have certain emotions such as happiness.

Bud Craig
Bud Craig states that there are two classes of emotions, classical and homeostatic. According to Craig, classical emotions (lust, anger, and fear) are the result of external stimuli. These emotions prepare an individual to copulate, fight, or flee and are basic survival emotions. The remaining emotions, homeostatic emotions, are the result of internal processes and occur to change behavior. These emotions are a signal that something is amiss and a change is needed to bring things back into balance. For example, if a person feels pain, the person is alerted to change something to stop the pain.

Arlie Russell Hochschild
Arlie Hochschild is a professor of sociology at the University of California, Berkely. Her theory of emotion concerns 3 new terms; emotional labor, feeling rules, and time bind. Hochschild agrees with the idea that emotions are learned through experience and are based on social norms and expectations. She defines emotional labor as the attempt to feel the correct emotion at the right time, and elicit the right emotion from others.

Feeling rules are social rules for feeling emotions. For example, its not appropriate to laugh hysterically at a funeral. Time bind refers to the contradictory pull of family values and work ethics on a person's time. While many working people state that family is the most important aspect of their lives, they also spend the majority of their time at work. Hochschild states that in order to cope with this contradictory pull, people use one of three specific defenses:

EmoNet
EmoNet is an internet site for any discussions relating to emotional research in organizations. The internet address is www.emotionsnet.org