We are social animals. Social Psychologists are interested in how we are influenced by others and the world around us. In other words, a social psychologist investigates how a person's thoughts, feelings and behaviors are affected by the people around them. In fact, other people don't even need to be around to have an effect on our behavior. Simply having the belief that someone is around is enough to affect our behavior.

Social psychologists believe that we are not simply the product of our environment or a product of our personalities. Instead we are the result of how these two things interact.

Ideas about social psychology have been around since Plato and Aristotle but it wasn't until after World War II that people began to really think about social psychology. After information about the Holocaust became public, people began to wonder how normal, regular people could perform such horrific actions as the type seen in Auschwitz and Dachau.

Force field analysis looked at forces that blocked something from happening and forces that encouraged something from happening. For example, if you wanted to buy a new car but didn't have any money, then the lack of money would be a blocking force and the need for a new car would be a driving force. Action research meant that a social psychologist would develop a plan for research, then implement that plan and observe the results. The social psychologist would then take these results to further refine the plan of research.

The fundamental attribution error is also known as correspondence bias or attribution effect and the concept was originally developed by Lee Ross in the 1970s. It relates to how people are more likely to attribute behaviors or events happening to someone else as a result of their personality while if the same event happened to us, we would be more likely to blame the environment. For example, if a student does not complete an assignment then the teacher may blame the student for being lazy and not look at any environmental reasons. But, if the teacher is unable to complete an assignment, then the teacher would be more likely to blame environmental reasons.

Floyd Allport is another important figure in the history of social psychology. Allport is viewed as the father of experimental social psychology because of the importance he placed on measurement and theory. Allport also wrote an influential textbook titled Social Psychology which was used for quite some time.

Social psychology continued to progress with a number of important studies done investigating people's behavior. Two of the most famous studies were done by the two social psychologists Stanley Milgram and Philip Zimbardo. 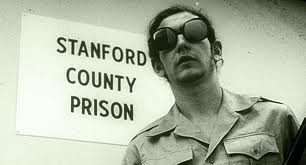 Another famous study done by a social psychologist was the Stanford prison experiment by Philip Zimbardo. In this experiment the subjects were divided into two groups: prisoners and guards. During the course of the experiment, the guards became overly aggressive and the prisoners became more and more submissive and depressed. The experiment was stopped after only six days instead of the planned two weeks because of the behavior of the participants.
Although these two studies are fairly famous the researchers would not be allowed to conduct this type of research today because of ethical considerations. These studies actually led to more stringent ethical criteria for conducting experiments since the studies were fairly traumatic for the test subjects.
Social psychologists have continued to develop research looking at how human behavior is influenced by interactions with other people. These areas include prejudice, aggression, obedience and conformity among others.

The Social Psychologist and Related Disciplines

A social psychologist can often be confused with either a personality psychologist or a sociologist. Although there may be some similarities between these professions, there are also a number of very differences.

A social psychologist will perform research into a number of different areas of human behavior. Each area of research will look at how human behavior is affected by other people as well as by the assumption that people are present.

Influence: A social psychologist can also investigate how we are influenced by our peers and other people we have contact with. A social psychologist studies concepts such as persuasion, conformity, obedience and peer pressure. Research can be conducted looking at how we are influenced by people as well as how to resist this influence. This is particularly helpful when learning how to deal with peer pressure.

Groups: We all act differently when we are on our own or when we are in groups. A social psychologist can study how being in a group can have a positive or negative effect on your behavior. Some areas of group influence that a social psychologist will study include leadership issues, group dynamics, group decision making as well as group violence and cooperation.

In order to study these various areas a social psychologist has three basic methods available to be used: correlational research, experimental research and descriptive research.

Correlational Research: Correlational research attempts to discover if there is any relationship between two different variables. It is important to remember that just because two variables are related to one another does not mean that one variable causes the other. Correlational research simply shows that where one variable is present then the other variable will also be present. For example, some social psychologists have attempted to show a correlation between violence and violent video games.

A social psychologist can use surveys and direct observation as well as use data from other studies to collect information for a correlational study.

How To Become A Social Psychologist

Where Can A Social Psychologist Find Work?

A social psychologist can find work in a variety of settings ranging from a university setting to working in the government conducting polls and developing methods to implement various government initiatives.

In addition to advertising companies, a social psychologist can also work in the human resource department of a business developing interview techniques and training programs for staff.

The average salary for a social psychologist is approximately $86,000 per year with a salary range between $53,000 to 116,000 and the job growth for psychologists is expected to continue to grow at a rate faster than the growth rate for most other jobs.