Charles Myers was one of the first military psychologists and advised the British army about psychological issues during World War I. He began working with soldiers who seemed unable to respond in battle situations and wrote that it was difficult to get the army command to recognize the legitimate psychological problems that some of the soldiers faced. Myers was the first person to use the term "shell shock" when describing soldiers who suddenly were no longer able to perform in combat situations.

During World War I, strides were made in military psychology within the American army. Robert Yerkes began widespread aptitude and intelligence testing in order to differentiate between literate and illiterate recruits. These tests measured a soldier's ability to recognize patterns, draw analogies and do arithmetic. These tests were designed to assess a recruit's intelligence regardless of the amount of education they had received.

Unlike the time after World War I, military psychology did not disappear at the end of World War II. Various veterans' hospitals began training clinical psychologists who could understand the needs of a veteran as well as diagnose and treat other problems. Over fifty percent of all veterans in VA hospitals at that time were diagnosed with a psychological problem. 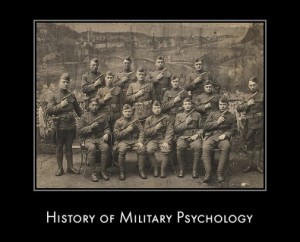 (image credit: freeparking) In a further development, the American Psychological Association organized the Society of Military Psychology in 1945. This society which was also known as Division 19 was one of the original divisions organized by the American Psychological Association.
During the Korean War, clinical psychologists began working overseas with soldiers and in the Vietnam War an increase in psychological problems associated with war was seen.
Post traumatic stress disorder became one of the leading problems faced by Vietnam vets.

As military psychology became more and more accepted it slowly became involved in all aspects of military life. At this point, there is little military activity or military development that does not involve psychology.

What Does A Military Psychologist Do?

A military psychologist will deal with everything from screening, weapon development and helping soldiers deal with issues like accepting the possibility of rapid deployment, the effects of injury and will even help the family of a soldier cope with these same issues. Let's take a more in depth look at a few of these.

A military psychologist will not only work with a soldier but also with a soldier's family. The family as a whole may have issues over a family member being injured or even adjusting to military life. A soldier's family has to learn how to deal with long absences and knowing that a loved one is in harms way. In addition to these issues, a military psychologist can work with a military family or a soldier dealing with the same issues that occur in the civilian population.

Military psychologists may need to travel vast distances to work with people who are deployed overseas. At times, they may even be required to be sent fairly close to the front to meet and deal with soldiers.

A military psychologist may be required to screen possible recruits to help evaluate their suitability for military life in general as well as what area of the military best fits with their abilities. Some of the criteria that a military psychologist will look for are a recruit's ability to overpower people, the ability to live with the threat of injury or death, as well as being able to follow orders from superiors without question. Recruits will also be evaluated to see how they can handle being sent overseas with little warning.

A military psychologist may be involved in developing a profile of the enemy's strengths and weaknesses, which can then be exploited. For example, during the Second World War, the British command used the Japanese fear of the Gurkha's use of a large curved knife to scare Japanese troops during night time raids of their camps.

A military psychologist may also be involved in the development of different equipment. Equipment such as a new weapon or vehicle may need to be ergonomically designed to ensure that the new piece of equipment and the soldier interact safely and efficiently. In addition, the military psychologist may be required to ensure that any new equipment meets the needs of the soldiers who will be using it.
How Do You Become A Military Psychologist?

In order to become a military psychologist, you will typically need to obtain a doctorate degree and pass all relevant state licensing requirements. Some military schools offer doctorate degree programs where the military will pay the student's tuition and living expenses. Once a degree has been awarded, a student will need to complete an internship which usually lasts at least a year.

In addition to the educational requirements, a person who wants to be a military psychologist may be required to pass a variety of physical requirements and fitness tests as part of joining the military and becoming a psychologist.

Where Does A Military Psychologist Work?

The need for military psychologists is expected to increase for a number of reasons the least of which are the active wars that the U.S. military is involved in. The post traumatic stress disorder rates during the campaigns in Iraq and Afghanistan have almost doubled and recent studies have placed the post traumatic stress disorder rates for women in the military at close to forty percent of the total women in the military.

In addition to the rising rates of post traumatic stress disorder, new advances in medicine and the nature of war itself has led to an increase of the number of soldiers returning from combat who have been severely injured. These soldiers all need long term medical and rehabilitative psychological services. The military has also recognized the increasing rates of alcohol abuse and alcoholism among war veterans.

In addition to this, the military has become aware of the usefulness of a military psychologist when it comes to developing strategies of deployment and even the development of equipment.